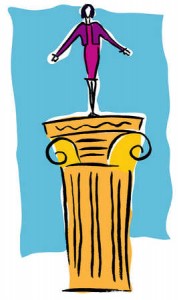 Most societies value success and winning, no matter how we define them. Winners and successful people receive more attention, are more popular, are generally better paid, progress in their careers faster and people would view them as role models, leaders and most importantly as being “right”.

In a capitalist society where income or net profit (in a business) is regarded as a critical metric for success, those who create more jobs, make most profit,  earn most and simply get ahead (by explicitly or implicitly beating others) along the way are generally better-respected, valued and glorified by the society. People want to follow their examples, listen to them and learn from them.

In a socialist society, it’s not that different. Success and winning are defined or measured differently, but the consequences are very similar. Those who serve the society most (such as civil servants, university professors, social entrepreneurs, job-creators, doctors or teachers) especially if they go above and beyond their call of duty become the role models and celebrities in those societies.

This trend exists even at nation levels. Those countries who are more successful or win in an international race (be it the World Cup or the World War) gain this special status. Think about the US and Soviet Union post WWII. Think about Germany and Japan in terms of their industrial might and success. Think about China, South Korea, U.A.E. and so on. Winning and success demands global respect and attention, followed by gaining more influence, power and authority over other nations.

Of course, we can and sometimes we should. Sometimes a winner is “right”. Sometimes a more successful person should be a “role model” or a “leader”. But what if he or she is wrong? What if he or she sets a bad example or is a terrible leader? I would argue that our societies tend to overrate the righteousness of successful people and downplay their flaws or weaknesses. Also, our societies tend to glorify the elite and ignore the hidden moral and intellectual gems of the non-elite.

This leaves us with a few significant implications to consider:

So what? Can we even change this norm? Perhaps not. Or not so quickly. But a starting point is by changing our own personal attitudes toward success and failure. By changing how we should celebrate failure and exercise humility upon our own successes. By trying to avoid an automatic extrapolation of strengths or righteousness based on one’s success or accomplishments. And by de-glorifying the elite in the eyes of our children, employees or students. To highlight that the winners are not necessarily right and the losers could be very right too.